Juro is an exciting LegalTech startup with an ambitious goal: to ‘make legal more human’.  This rapidly growing, innovative enterprise is transforming the way lawyers work and reaping the rewards of its impressive values and integrity.  Richard Mabey, co-founder and CEO, discusses the secrets of Juro’s success in a three-part series.

In Part 1, Richard offers some valuable advice about how to navigate a successful career. Careers can feel more like spaghetti junction than a fast-flowing motorway towards our goals. Richard explains how he sorted through the spaghetti, and the values that guided him in the process of launching Juro.

In Part 2, Richard will describe the challenges of scaling-up a business and the framework he uses to tackle them.

Finally, Part 3 will explore the culture of Juro and the values they live as a company. 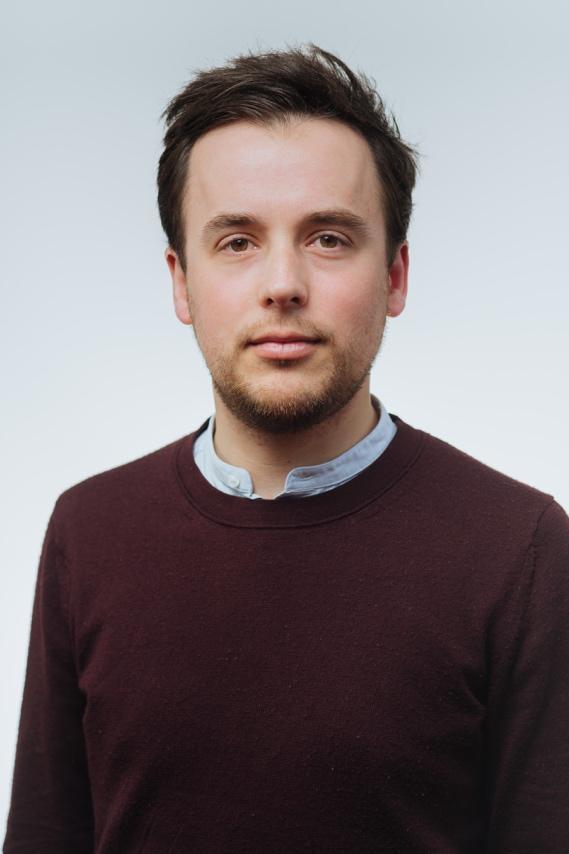 If you read my LinkedIn it would seem there was a perfectly planned journey from being born to co-founding Juro. But when I graduated with my philosophy and languages degree, one thing I hadn’t learned was what I wanted to do with my life. I was at square one and I needed to get a job. I’d done some work experience with criminal barristers and found it interesting, so I thought I’d pursue that path further.

My mini-pupillage that summer was actually in the building where Juro is now located, though at that time it was still Tooks Chambers. I remember seeing some of the great advocates of the day – Helena Kennedy and Michael Mansfield, to name two – and I think I was excited by advocacy because it was basically arguing at people. Trials related to the 7/7 terror attack were going through the Old Bailey at the time. It was my first real flavour of law.

I found myself applying for City training contracts, and I missed all the deadlines apart from Freshfields’ and somehow got a contract with them.  It was slightly accidental how it all came about, but it was at least decisive.

Freshfields offered me the option of six months off before my training contract, so I spent three months teaching the equivalent of the LPC for judges at the Institute of Legal Practice and Development in Rwanda. I was also interested in public policy and wrote a published paper on the Alternative Vote for the Bow Group.

When I got to Freshfields in August 2010 I was ready to get on and have a job. Freshfields gave me fantastic training. My supervisors had a big role to play in that. There was a period when there was a lot of heavy lifting on the transaction I was working on – a lot of proofreading in the middle of the night – and I didn’t feel I was learning enough. My supervisor suggested that I come in at eight on a Wednesday morning and he’d spend an hour with me going through a legal topic. Even though he was already working eighty to ninety hours a week, he still took the time to train me one-on-one.

By the time I qualified I had quite a bit of corporate grounding. As a NQ I mostly worked on M&A and private equity deals. They were fast-paced, aggressive transactions. The deadlines were always impossible, and I spent a couple of nights sleeping under my desk on a stack of FT newspapers.  It was quite fun at the time, in my early twenties. I think now it would be a bit more grating.

The turning point came when I was seconded in-house. I was getting frustrated as a private practice lawyer. Although the work was challenging and interesting, I was never seeing the results of our labour; we were always moving on to the next thing. I felt a slight lack of ownership.

I worked on an IPO for the in-house client, where everything you did had a significant impact on people. I could get fully involved in the project and see its results. I realised I was getting jealous of the client’s work, and I toyed with the idea of moving in-house. But I didn’t make that particular move, and instead the idea for Juro was born.

I was increasingly frustrated with the tech stack we were using at the time: Microsoft Word, email and PDFs. I realised that most of the work we were doing was just process, not legal advice. I decided I wanted to solve that problem. I needed to know something about business, so I started an MBA at INSEAD in 2014. It was extraordinarily high-pressure, but it meant I could learn what I needed quickly and move on.

I worked on the concept for Juro in my classes at INSEAD, but the more I experimented, the more I found out I didn’t know. I realised how blunt the concept was, how refined it needed to be, and how much more I needed to understand, like distribution and strategy.

Then the Juro concept won the INSEAD venture competition. My winnings were enough to build a minimum viable product, but I wasn’t ready to launch Juro.  I wanted to get some real-world commercial experience first. I’d connected with the UK CEO of LegalZoom, who invited me to join the team.  I spent nine months away from my concept, learning the craft of how to build a product.

I needed to understand how to go from an idea to a finished product; how could I transform a concept into millions of lines of code that actually do something, that solve the problem? There were so many technical elements I had to learn: how to code, how to build a product, how to design a product that people actually want to use.

I’d met my co-founder, Pavel Kovalevich, at INSEAD, and we started working together after my time at LegalZoom to see if we could launch the Juro idea. We started doing some customer interviews, which helped us identify the exact problem we were solving with our product.

I think you can learn more from ten interviews with potential customers than you can from ten years of further education. The interviews made us question whether Microsoft Word was the correct tool through which to agree legal contracts; did it make contracts easy to work with? The answer to the question was a resounding no. 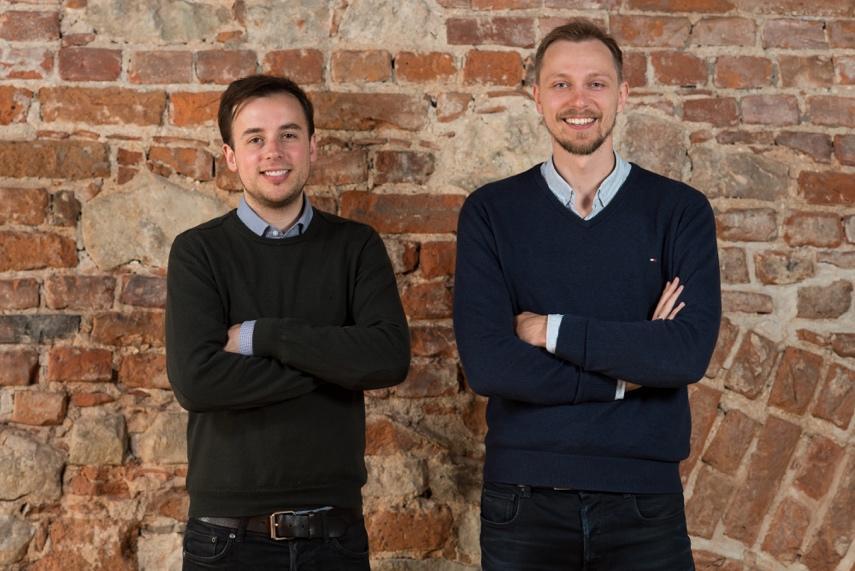 Most businesses fail because they don’t solve a problem; they produce a product that no-one actually needs. We had validated that we were solving a big problem, and that was enough to take a risk and build the company.  Reshma Sohoni, one of the partners at SeedCamp, agreed to give us a convertible note for seventy thousand euros, which was enough to persuade us to leave our jobs. Then we went in full-time in March 2016. The launch location was my kitchen!

We started by building a contract editor.  It was important to us that it was machine-readable – with this whole world that’s now come into fruition around machine learning and data, it was important that the editor was able to facilitate that – and was integrated into the systems people use every day.  Achieving both of those features required an awful lot of research, iteration and trial and error to get to the point where we are today.

We got customers fairly early.  In 2017 we started working with Deliveroo, starting with a pilot product and iterating regularly.  It’s certainly a good sign that they’re still a customer nearly three years later.

Getting feedback early really helped us. All our assumptions about what was a good idea turned out not to be a good idea when the product actually got into the hands of users. It was essential in helping us realise our mission of making legal more human. It’s an unusual mission in the context of the unsexy world of LegalTech and contract management, but it’s actually pretty simple: either people use your product and go, ‘wow’, or they don’t. 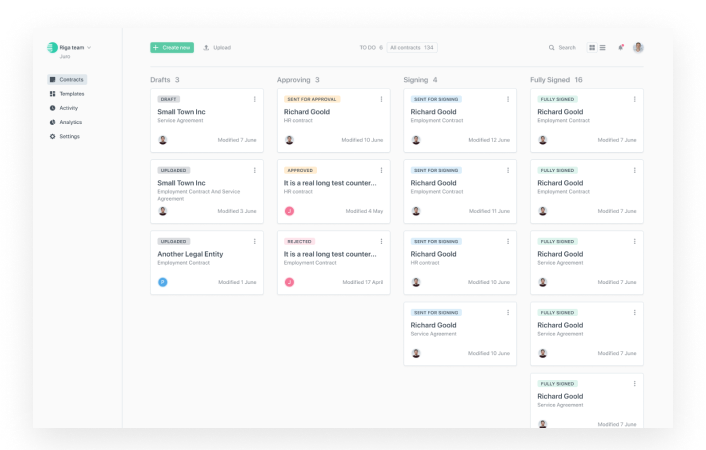 Most of the time, when customers try new LegalTech products, they don’t go ‘wow’. Some products can feel clunky and hard to use. I think our obsession with user experience and design enabled us to differentiate ourselves in the market. 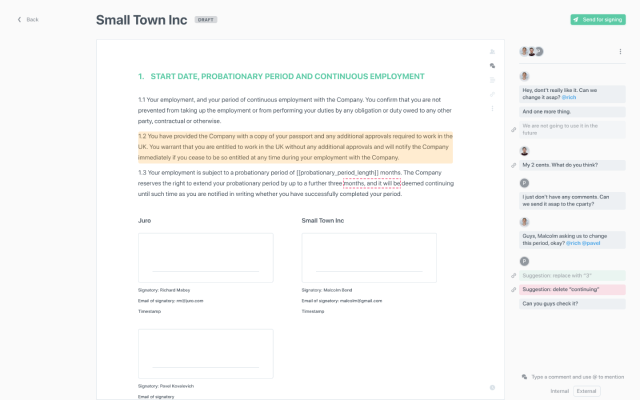 Trying to create the ‘Apple’ of contract management requires two things: it requires that you talk to customers – and you’d be surprised how many startups do not talk to their customers – and it requires a cross-functional team. We’re not a bunch of ex-lawyers – in fact, there’s only two lawyers in our team of twenty. We’re also data scientists, developers, and designers who bring the best of their fields to bear on this legal problem.

Becky Baker was talking to Richard Mabey, CEO and co-founder of Juro. For more information or comments please tweet @LTechnologist, @GetJuro and @rebeccaJKBaker. Look out for Part 2 of our Juro series in December, where Richard will explain how he deals with the challenges of scaling-up a business.

Tags:
Previous Article
Justice for all: the transformation of legal services through technology
Next Article
Are UK law students future-proof?

Scaling: A Framework for Growth – An interview with Richard Mabey
Admin January 21, 2020

Scaling: A Framework for Growth – An interview with Richard Mabey